Welcome to our coverage of the UFC 226 pay-per-view from the T-Mobile Arena in Las Vegas, Nevada.

I will be covering the card throughout the night and will have a post-show on the site later tonight with Phil Chertok for an extensive review of UFC 226.

The first round was a tentative one. Whitmire maintained her stance and was conservative but efficient. She would enter with a combination and then step back to reset. Near the end of the round, she landed a leg kick. 10-9 Whitmire.

Moyle’s corner suggested taking Whitmire to the ground, but her efforts were blocked. Moyle had a better round through leg kicks and landing body shots. Whitmire wasn’t landing at the same rate as she did in the first round and was pressured by Moyle. 10-9 Moyle.

The third round was Whitmire’s round as she got the takedown early and controlled Moyle from half-guard. Whitmire landed strikes on top and Moyle had no answer to escape the position. 10-9 Whitmire and 29-28 on my scorecard.

After eating a big right hand early, Hooker came back and dropped Burns with a counter right hand that landed flush. Burns recovered and got to his feet, where he ate a big knee and Hooker ended the fight with a left hook to the body and follow up left hook to the head as Burns went down and it was over.

Griffin started the fight by throwing a lot of shots. Millender attempted a number of flying knees and mixed with leg kicks. Griffin got the takedown against the cage and controlled the rest of the round with pressure on top in half-guard. 10-9 Griffin.

Millender rebounded in the second round with the difference maker being his body shots. Millender was connecting with knees to the body to compliment a thunderous kick that Griffin absorbed. Millender landed another knee to the body near the end of the round and scored a takedown. Griffin landed some big shots in the round but this was a clear round for Millender. 10-9 Millender.

It was a close third round until the final 90 seconds when Millender turned up the volume. Millender connected, placing Griffin up against the fence as Millender started throwing a lot. Millender rocked him with a big knee to the head and did enough the clinch the fight. 10-9 Millender and 29-28 overall.

Millender paced himself well and was selective with his bursts of offense. The highlights were his body work and ability to throw his knees with relative ease and found a lot of success with the body and head being targeted.

Klose had a very effective game plan throughout the first round consisting of calf kicks and constant pressure that caused problems for Vannata. At one point, Vannata went for a spinning elbow and the opening allowed Klose to connect with a right hand and reverted back to the calf kicks. 10-9 Klose.

Klose had another strong round in the second, slicing open Vannata with an elbow near the right eye. Klose kept on the lead leg with low kicks, forcing Vannata to switch stances. Vannata attempted another spinning back fist and ate another right for his efforts. 10-9 Klose.

The third round was closer as Vannata landed some spin kicks at the start and even got a takedown late in the fight, took the back of Klose but was too high and gave it up. Klose targeted the lead leg further, even pointing to it to get inside Vannata’s head. Klose landed with a superman punch with the right-hand landing flush. 10-9 Klose.

The first round was very close. Font was busier and landed a nice hook to the body, but the big moment of the round saw Assuncao land a counter combination and drop Font. Font did get back to his feet quickly but it was the difference-maker for Assuncao in the round. 10-9 Assuncao.

Assuncao immediately scored the takedown at the start of the second round. He worked in half-guard and landed strikes before Font was able to scramble to a better position and eventually get to his feet. Assuncao was judicious with his strikes standing but landed one combination of note. 10-9 Assuncao.

In the third round, after recovering from an eye poke, Font was taken down and Assuncao moved into side control and attempted to finish with a submission but never came close. 10-9 Assuncao and 30-27 on my card.

The first round was all over the place. Costa was pressuring early with kicks to the body until Hall found the rhythm with his jab and started picking Costa apart with it repeatedly. There were two times outs during the round with Costa hitting Hall low and leaving the audience restless by the second foul. Costa had his most success pressing Hall against the cage and landing some big strikes to the body and throwing with all his power. It was a close round as Hall landed more but Costa had the most effective strikes. 10-9 Costa.

Costa came out in the second round and connected with a right, leading to Hall taking him down and Costa popping right up. Costa tagged him with a right and stunned Hall, he swarmed Hall, followed with a big jab and Hall tried to regroup. The two threw big strikes, Costa dropped Hall and it was over.

Rountree began standing in the pocket with Saki and wasn’t retreating. Rountree blasted Saki with a left hand and dropped Saki, he finished him with hammer fists for the stunning knockout.

The first round saw Chiesa score a number of takedowns, but Pettis landed the better strikes throughout the round. He caught the leg of Chiesa, placed him on his back and dropped a pair of right hands. Chiesa probably edged the round but was close.

In the second, Pettis connected with a right hand and dropped Chiesa. He attempted a guillotine unsuccessfully and readjusted off his back with a tight triangle-armbar and Chiesa tapped.

WINNER: ANTHONY PETTIS BY TRIANGLE ARMBAR AT 0:52 OF ROUND 2

They immediately cracked heads and both were cut. Perry landed a blistering elbow strike against the cage. Felder settled into the round with the use of calf kicks and connecting with right hands. It was a hard round to score as Perry did more damage, although Felder was busier throughout the round. 10-9 Perry.

At the start of Round 2, Perry lifted and slammed Felder and connects with a series of elbows standing. Perry put everything into a left hook that cut open Felder above the left eye. Perry executed a German suplex to take him down, when they got up they traded elbows. 10-9 Perry.

Felder told his corner that he has a broken arm.

The third round saw Perry connect with a series of big shows. It was amazing that Felder continued throwing and standing with Perry despite his arm. Perry definitely won the round but Felder showed an incredible toughness. 10-9 Perry.

The first round was extremely uneventful. Lewis won by the round by default as Ngannou landed one strike in the entire round. It appeared to be a strategic measure of Ngannou preserving his conditioning. 10-9 Lewis.

The second round saw nothing happen. This is one of the worst heavyweight fights ever. It is the rare round that could go 10-10. Lewis landed a body kick and that may have won him the round.

The third round continued with the same pace. Ngannou threw a left near the end and met with some knees from Lewis. 10-9 Lewis.

Horrendous, one of the worst fights you will ever see.

Brock Lesnar arrived in the arena prior to the main event. 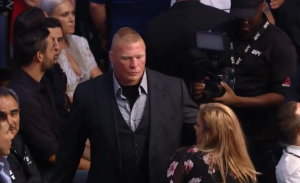 The fight began with Miocic outstriking him and clinching Cormier, mixing in strikes against the fence.

Cormier fired back with a combination and then blatantly ran his fingers into Miocic’s face and poked his eye.

The fight resumed, they clinched in the middle and Cormier rocked him with a huge right hand, dropped Miocic and finished with ground and pound to win the title.