Welcome to our coverage of the NXT UK TakeOver: Blackpool special from the Empress Ballroom in Blackpool, England.

Later tonight, we will have a TakeOver POST Show on the site with Martin Bushby and Benno of the British Wrestling Experience reviewing the card.

Bate and Seven had new tights as a tribute to the British Bulldogs. The audience began singing for Bate at the beginning of the match and doing the “shoes off” chant.

Bate pulled off an incredible bridging sequence off his back with Gibson. Seven came in and hit a dive to the floor while grabbing his left arm and beginning to sell it. Gibson and Drake had the advantage on Seven attacking the left elbow and lower back. Seven was nailed in the back of the head with an errant forearm by Drake and was busted open.

Seven battled to his corner and tagged Bate after a long period of selling.

Bate placed Drake onto the back of Gibson and lifted both for an airplane spin as Drake fell off. Bate sent Drake off the edge of the apron with an exploder onto Gibson catching him on the floor.

Bate and Seven did a Bulldog tribute with a running powerslam and diving head butt combination onto Gibson.

Gibson hit Bate with the Ticket to Ride and then Helter Skelter to Seven followed by a 450 splash from Drake for the first near fall of the match. Gibson applied Shankly Gates to Seven as Drake stopped Bate and applied his own version of the submission. Bate lifted Drake and broke Seven free with a Death Valley Driver on top of them.

Bate was taken out with a dropkick during a dive to the floor and allowed them to hit Ticket to Heaven onto Seven and win the match.

Solid tag match and Tyler Bate stole the show with his performance in this one. The audience was excellent all match, too.

They did an angle earlier in the day with Devlin attacking Banks when he arrived at the building. Devlin attacked the left knee of Banks before the bell rang on the floor.

The officials came down and helped Banks to the back. Devlin called himself “the ace” and cut a promo inside the ring. Johnny Saint announced they had a backup plan for Banks and the lights went out and Finn Balor entered to an enormous pop.

Devlin mocked Balor as he had the advantage. Balor was dropkicked off the turnbuckle and fell to the floor. Balor was selling the ribs consistently.

Balor attacked the ribs of Devlin in retaliation, made the “too sweet” sign and hit the reverse Bloody Sunday/1916 after several attempts for a near fall. Devlin deadlifted Balor into a suplex for his own near fall.

Balor’s third attempt at the coup de grace was stopped with Devlin knocking him off balance. Devlin executed a moonsault and landed on Balor’s knees.

The audience was red hot for Balor from the moment the lights went out and throughout the match. A lot was given to Devlin, before losing. The story was Devlin knowing most of his teacher’s tricks, but not all of them with each weakening the ribs of the other.

Eddie Dennis vs. Dave Mastiff in a No Disqualification match

Dennis used a kendo stick at the beginning and removed the padding on the floor. Mastiff gained control of the kendo stick and attacked Dennis.

Dennis caught Mastiff and hit a spinning side slam onto the steps inside the ring. Dennis stopped Mastiff on the turnbuckle and hit the Severn Bridge (Razor’s Edge).

Mastiff teased a German suplex off the apron, it was blocked, and instead, Mastiff hit a rolling fireman’s carry onto the exposed portion of the floor.

Mastiff kicked out the Neck Stop Driver. Dennis went for the Severn Bridge through a table in the corner, but Mastiff stopped him and put Dennis through it with a running cannonball. Mastiff pinned him for the win.

Instead of being a wild brawl, the match focused on a few key spots to maximize them. The match was alright, not at the level of the last two matches, but was different in a good way. They went the proper length for their spot on the card. They each showcased some athletic spots that stood out. They pushed Mastiff as “the dominant big man in NXT UK”.

Kay Lee Ray and Jazzy Gabert were shown in the crowd with McGuinness stating they would be part of NXT UK.

Storm landed a dive early and Ripley took over from there following a running boot and sending Storm into the barricade. Ripley continued with the advantage until Storm dropped her with a headbutt.

They had a striking exchange that led to consecutive German suplexes from Storm, had Storm Zero blocked and Storm countered the Riptide. Ripley applied an inverted cloverleaf to place pressure on the back, Storm broke out of the hold and applied an ankle lock.

Ripley kicked out of a bridging German and came back to hit the Riptide for a two-count, which didn’t receive a major reaction. Storm broke free of Ripley’s wrist control and landed a headbutt and Storm Zero for her own near fall, that generated a bigger reaction.

Storm countered another Riptide and hit Storm Zero for the second and final time, winning the match and the title.

There was a good build-up to this match with the story that Storm couldn’t beat Ripley in the past and then getting the big title win here. The audience seemed to be a down throughout the match, up until the end with the Storm Zero near fall and into the finish. They got the big pop for the title switch and was a big win for Storm. I didn’t think this hit the level of some of the big women’s matches the WWE has had over the past year.

Charlotte Flair was shown in the crowd.

Pete Dunne vs. Joe Coffey for the NXT UK title

Coffey came to the ring with his Gallus teammates Mark Coffey and Wolfgang.

Dunne is being pushed as the longest reigning champion of the modern era in the WWE with a 603-day title reign going into this match. McGuiness said he could be setting his sights on the reigns of Bruno Sammartino, Pedro Morales, Bob Backlund, and Hulk Hogan.

Coffey went for All the Best for the Bells early on, which Dunne avoided. Dunne went for the kimura several times until being suplexed. They went to the floor and Dunne was slammed onto the ramp.

Coffey was sent to the floor and hit with a moonsault off the second turnbuckle by Dunne.

Coffey drove Dunne into the corner with a running shoulder tackle, hit a powerbomb and Dunne kicked out.

Coffey lifted him for a piledriver, but instead turned it into a Boston crab, think about that.

Coffey went for a spear and into Dunne’s knee. Dunne landed a forearm to Coffey coming off the top and hit the Bitter End for a near fall.

Coffey pulled Dunne off the turnbuckle and landed a sit-out powerbomb on the edge of the apron. They beat the count back in and Dunne fired up with stomps. Coffey landed All the Best for the Bells and Dunne kicked out. The audience gave a standing ovation with both down on the canvas.

Dunne applied a triangle, Coffey lifted him onto the top turnbuckle and suplexed Dunne off to break the triangle. They stood and traded as everyone cheered. Coffey went out on the ropes and Dunne collapsed onto his chest.

Coffey hit his version of Croyt’s Wrath. Dunne countered into a DDT and hit the Bitter End, turned over and Coffey rolled away.

They were on the top turnbuckle, they each fell with Coffey landing on the floor and Dunne inside the ring. Dunne went to the floor, was hit with All the Best for the Bells, was rolled into the ring and Dunne kicked out again. They went to the top again, each lost their balance and crashed to the floor again. It seemed evident after two tries that it was a mess up.

Dunne hit the Bitter End in the ring, Coffey kicked out and then Dunne applied the triangle while twisting the fingers for the submission.

WINNER: Pete Dunne at 34:14 to retain the NXT UK title

It took a long time for me to get into this match and they were hitting their groove around the 25-minute mark. Then, the spots on the top turnbuckle seemed to throw them off and went to a different finish. There were parts that were very good and after a long time, the audience was hot for it, but there were problems with the match, too.

It was a tough sell putting Coffey into this role as I don’t feel anyone believed he was beating Dunne or at least didn’t want to see him win the title.

Dunne was posing in the ring to end the show as WALTER came out to a huge reaction. Joe Coffey stepped back into the ring and was rocked by WALTER and sent to the floor. They had a staredown with Dunne holding the title with his teeth.

Overall, this was a good show, but not an excellent one. The tag title match stole the show and the reveal of WALTER led to the show going off with a strong note and a big match people want to see with Dunne. 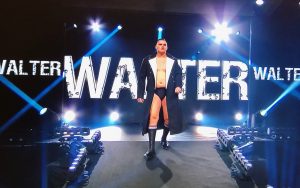