With the arrival of pumpkin spice everything as we cross into the middle of the month and close in on the official start of autumn, the excitement of wrestling isn’t waning! Today’s DSW comes to you from my hotel room in New Jersey, where I’m on my first official Dream Slam Weekly Learning Excursion Field Trip! On the flight up this morning, I watch the news when I should have been sleeping, but let me tell you I nearly did a spit-take when they announced 100 Shopping Days Until Christmas! CHRISTMAS?! I need to clear the threshold of October before I can even begin to think about holiday shopping and travel plans for the year’s end.

Earlier this week, the Japanese government has continued hinting that they’re possibly going to remove the remaining restrictions on international travelers, largely due to the weakness of the yen internationally and lots of international travelers heading abroad to places that can scratch their travel itch. That being said, I would keep your eyes posted on Japan embassies and travel pages for official announcements, especially if you’re like me and itching to secure those cheap airfares to Tokyo for the new year! I need to go to Royal Quest 2 in just over two weeks before I can even begin to think about more international travel beyond the beginning of October.

Yet my Google flight notifications… say quite differently.

When I first decided to go to this show, it was purely on the announcement that both Jungle Kyona and VENY (ASUKA) were scheduled to participate. One of my favorite Young Lions on Excursion, NJPW’s Yuya Uemura was soon added to the card as was Sumie Sakai, genuinely one of my favorite people in all of wrestling. Unfortunately, VENY would not be able to make her scheduled appearance due to an unavoidable scheduling conflict, so I hope I get to see her wrestle one day.

GSPW’s Openweight Tag Tournament – just when I thought Tourney SZN was over… they announced the first round matches! I love that it is a mix of participants! I would give Garden State Pro-Wrestling a follow!

I had a blast at GSPW. It was great catching up with friends, making new ones, and yes, even diving out of the front row as topes crashed into the center seats a couple of times in various different matches. The atmosphere and crowd were light, fun and respectful! For a newer promotion, the event ran rather smoothly. There wasn’t any problem finding a seat, and everyone was accommodating when the scrambles ensued shortly before the multiple …dives. As a first time guest,  I would definitely love to come back again, and if you have the opportunity to check out what they’re doing, I think you’d have a wholesome, fun time with great wrestling.

There were to fun & short pre-show matches, but I didn’t include the results above as I didn’t quite catch the names of one of the competitors, so until I find out what his name was, those results will be omitted for the time being. However, I might now be a big fan of Filipinot Grigio.

It seems Honma and Shizimu caught CMLL’s attention with their performance in the CMLL x Ice Ribbon Mexico Excursion Tournament. Honma will challenge Dalys for the CMLL Japanese Women’s Championship at Fiesta Mexico! They had a contract signing earlier this week.

Genuinely some of the hardest working freelancers on the Joshi scene. While COLOR’S got their start in ActWres Girl’Z, they are blazing their own trail on the independent scene and partnering with bigger promotions. Their affiliation with Cosmic Angels’ in Stardom has helped put them on casual fans’ radar, but they are quickly taking over by working together but also striking out on their own at various promotions.

GLEAT announced earlier this week, that they will expand to include a new brand: GLEAT MMA. At the press conference, Maya Fukuda who is currently contracted with GLEAT and participating in only Lidet UW FRules matches attended the press conference! It seams that she will aim to be part of this expansion brand, 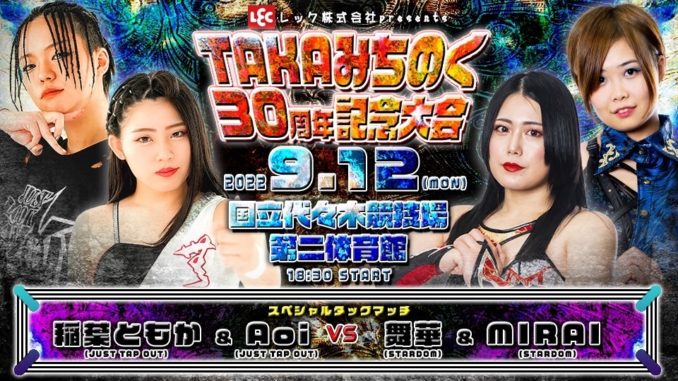 Yes, I retweeted a lot of bloody Despy/Kasai photos from this match. I have yet to watch it, but the reviews I’ve seen have been nothing but glowing. Their continued story together, keeps making me want to watch more, but all in due time, right?

In last week’s Dream Slam Weekly, NJPW joined the class roster with all the intricate details on the IWGP Women’s Championship and the first batch of match announcements for Historic X-Over (Crossover) in November. Additionally, the announcement that Stardom would make good on Kidani’s strategy to begin dispatching Stardom talent on the international shows with NJPW. October’s Rumble on 44th Street (10/28) will have the first glimpse of Stardom since the G1 Supercard at Madison Square Garden in April 2019.

Chanyota showing us her power, with an assist from Rossy Ogawa! pic.twitter.com/sIZoYKkKf7

The show opened with the announcement that the main event: Suzume vs. Miu Watanabe would decide the number one contender for Alex Windsor’s International Princess Championship defense at Wrestle Princess III

What I liked about affording Miu Watanabe and Suzume this opportunity was they were two of the four semi-finalists in this year’s Tokyo Princess Cup, so even though both came up short in the end, their hard work did not go unnoticed!

WAVE is raising funds for their former champion, Nagisa Nozaki, who recently had knee surgery! T-shirts are available for order until 9/22, but it seems payment is only accepted via JP bank transfer, so getting one might be a bit of a challenge!

Complete details on this special event produced by Minoru Suzuki are available in last week’s DSW!

Meanwhile in the US…

AEW Goes to TGS22! With the upcoming launch of their video game, AEW held some exhibition matches at the Tokyo Game Show, one of the largest video game showcases in the world. This was in conjunction with THQ Nordic. It is uncertain if these exhibition matches will be made available on AEW’s YouTube or if they are just a special treat for those in attendance at TGS!

Homework: None this week! I’d recommend checking out Garden State Pro-Wrestling’s Dynasty Clash! While the card was longer than I expected, it was a great new promotion to add to my queue.

If you see me, please say hello! Also, if I spot a POST Wrestling shirt… I may stop and compliment you on it! Tell me your name, preferred pronouns & who your oshi (favorite wrestler(s)) are! Safe travels!

FIELD TRIPS – Please say hello if you see me at a show!

Thanks for reading! Have a lovely week!

About Karen Peterson 64 Articles
Occasionally drops by wrestling podcasts, but remains rather elusive. Joined the Japanese wrestling fan scene in summer 2017, and continues to work on bridging the language gap between fans. Outside of wrestling, she’s a dog mom, perpetual Japanese learner, and when conditions permit, world traveler. Never skips dessert.
Instagram